John and I could not resist the temptation to take on another painting-a-day challenge when he came home for the Christmas holidays. It was perhaps even more challenging to find scenery or subjects that we had not done last year. So, even though this Christmas threw in some extra complications, like a new granddaughter, which meant that there was not always time to fit in a painting session each day for me; but John did succeed in his aim to do a painting a day. Here are the sketches from the 15 days of the challenge. All of mine are 400 x 320 mm. which is close to the standard A3 format. 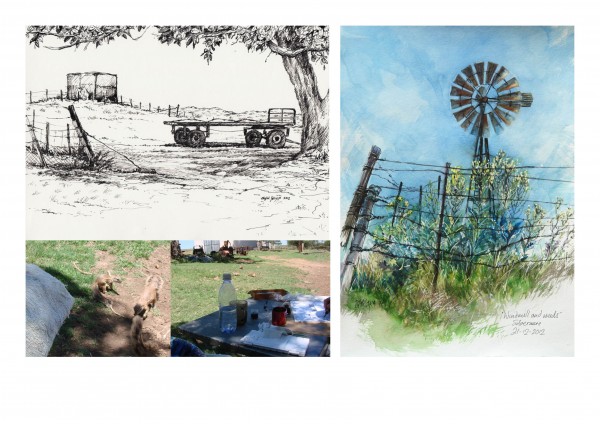 Day 1.—- 21 Dec.2012 Behind the workshop.      We painted different scenes while still sitting next to each other. The resident Ground Squirrels were so curious that they came to see if they could find anything to eat in the basket next to my chair ! John’s pen & ink drawing is on the left and mine is on the right. 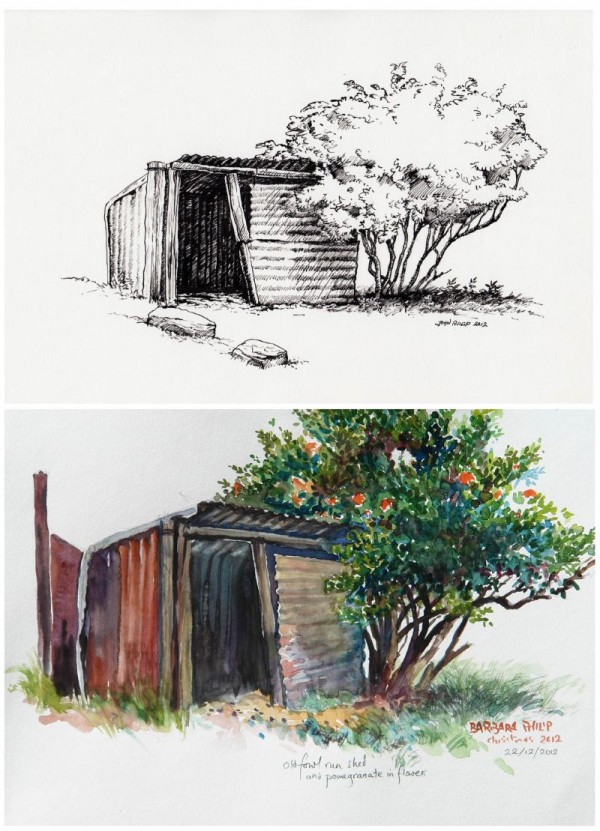 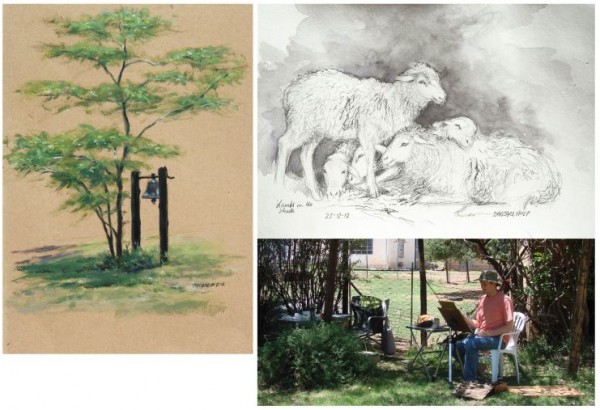 Day 3.— 23 Dec 2012. Sketching in a small patch of shade near the garage.    We chose different subjects: John, the bell and tree that I have painted before, and I chose to sketch the lambs that were also squeezing into the same patch of shade, on the other side of the gate. It was fun to stick to a black & white pencil study, with a grey wash background. 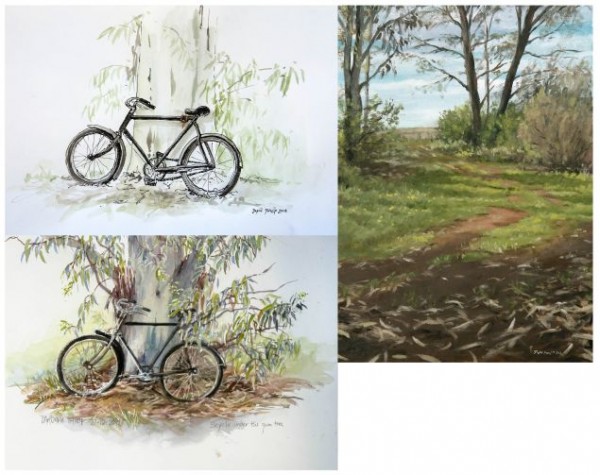 Day 4 & 5. — 24 Dec 2012. Christmas Eve was a particularly busy day for me, so John sketched alone,… the bicycle under the gum tree. His is the top sketch on the left. Whereas, on Day 5, Christmas Day, I was free to sketch the bicycle scene. John then turned his attention beyond the tree to the road that leads to the grid.  He painted that scene in oils. 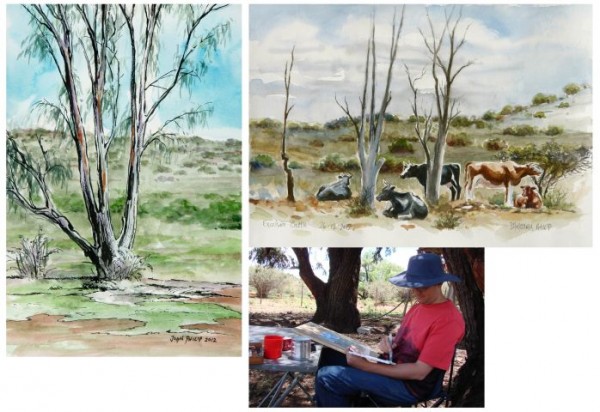 Day 6.—26 Dec.2012. Sketching at Excelsior. While John concentrated on one of the gum trees, I was more fascinated by the cattle under the gums.

As my delightful little granddaugter and her parents were leaving for their seaside holiday on the 29th, I decided to give up sketching and spend more time with Sue and Chloë. 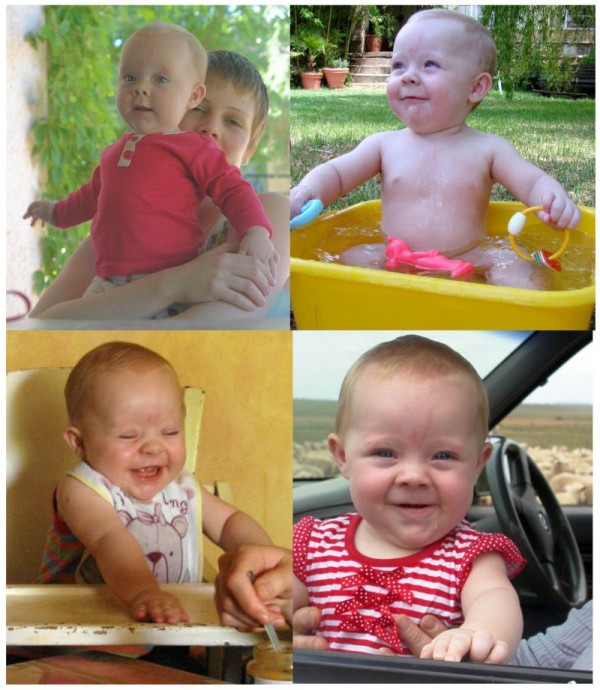 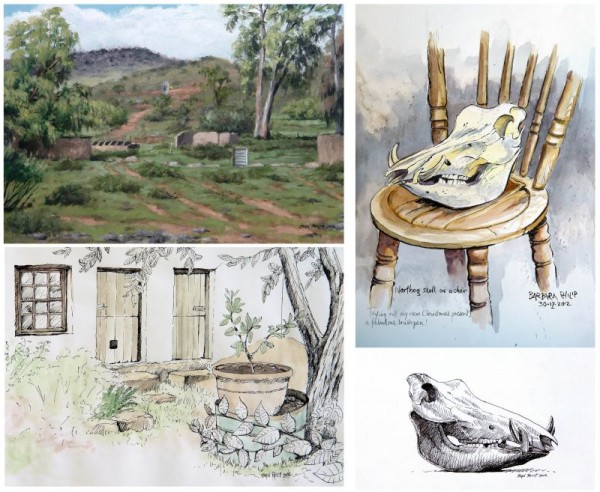 Day 7, 8 & 9. —-27 – 29 Dec 2012. The warthog skull and other scenes.     While I spent time with Chloë & Sue, John painted the scenes top left, and the pen & ink of the warthog skull, bottom right. Then on Day 9 when Sue’s family had left, John and I sat together and did the other 2 sketches. I liked the skull but decided to put it onto a chair in the gardern where we sat. John chose the scene of the two store room doors and window. 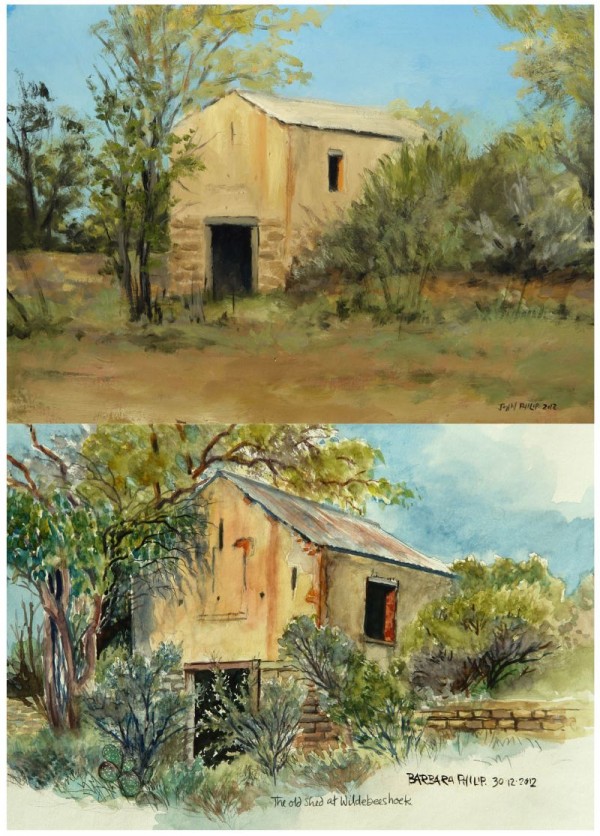 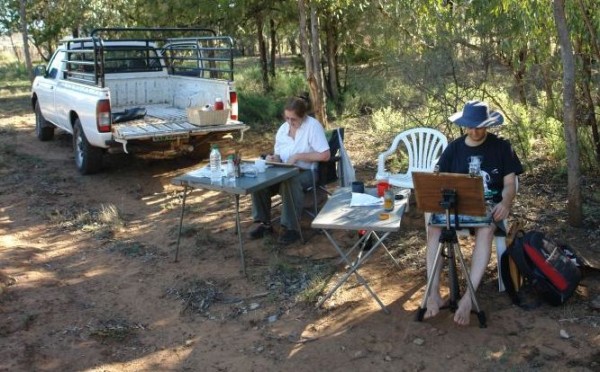 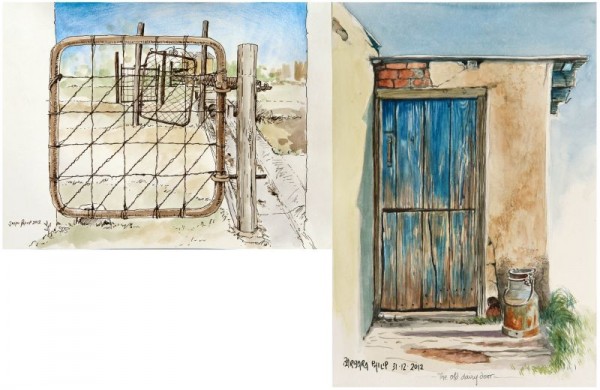 Day 11.— 31 Dec 2012. New Year’s Eve. Dairy session.      The quest to find a shady spot always dictates the subject of our painting during the HOT, HOT days of summer. We found a little patch of shade between the stable building and the dairy. We could not sit side by side because it is a narrow passageway, so we sat with our backs to each other facing in opposite directions. John did the series of 4 gates, and I did the blue door of the Old Dairy. 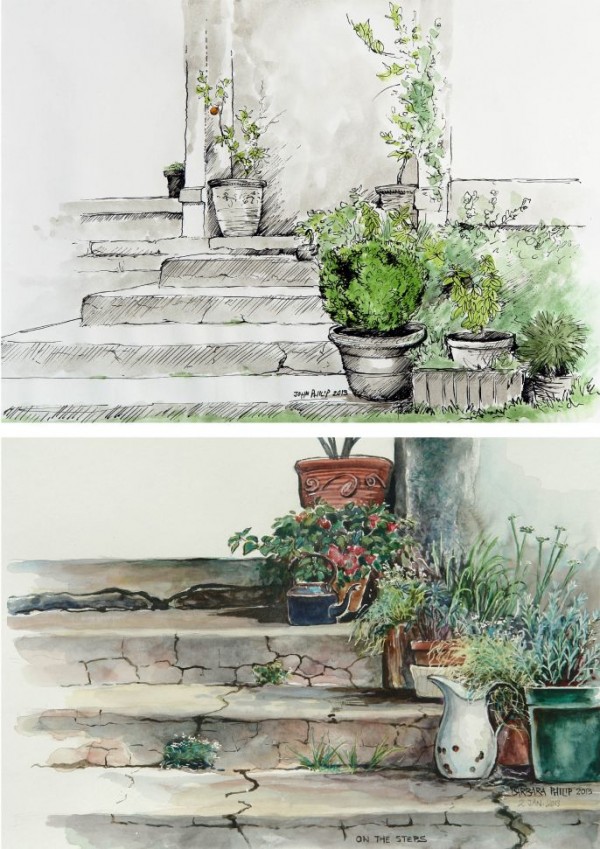 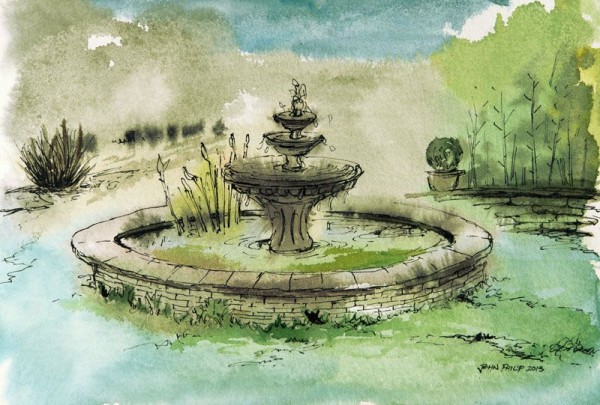 Day 13. — 2 Jan 2013. I put too much detail into the “On the Steps” picture that it got too late and the light was poor, so I had to finish the next day. While I did that,  John did a lovely spontaneous sketch of the fountain. 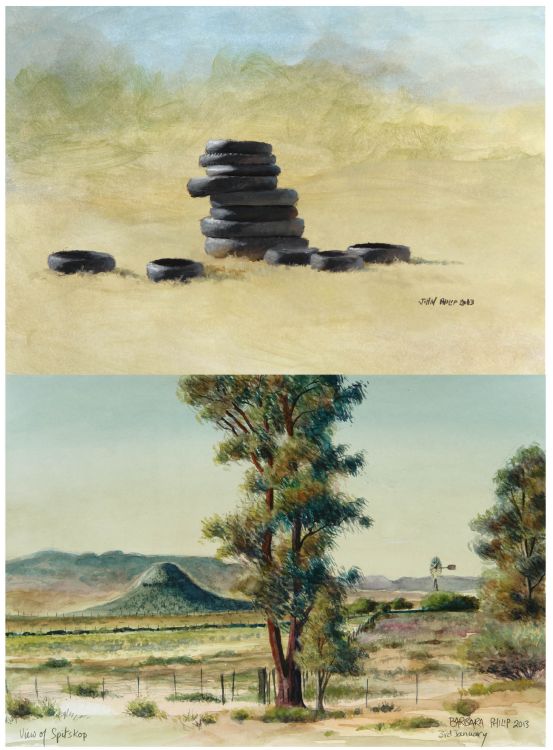 Day 14. —3 Jan 2013. Old tyres and the view North.         We sat together again, but did not paint the same scene. We were under the big gum trees near the Pig-sties. John chose to isolate a pile of tyres nearby, in oils ( top picture); and I chose the far scene beyond. 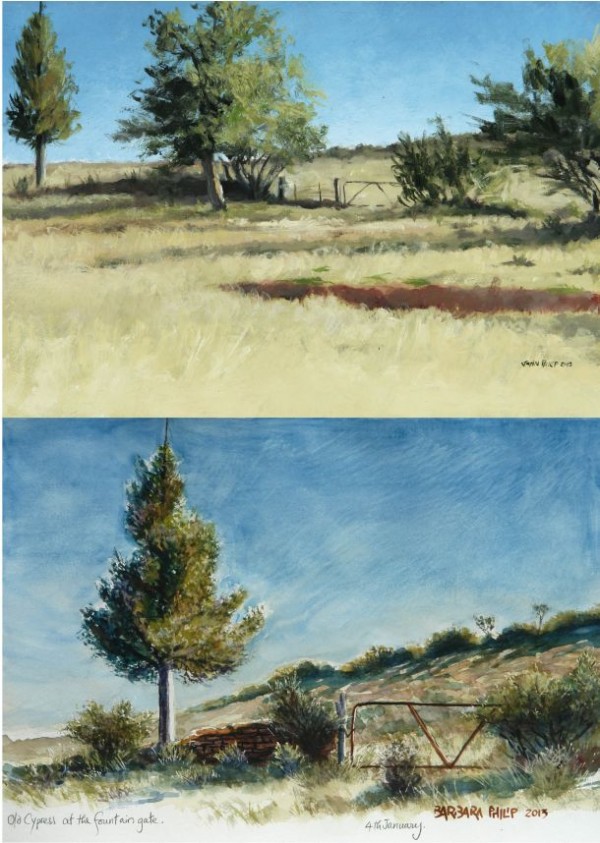 3 responses to “The Christmas 2012 Painting Challenge.”